skip to main | skip to sidebar

I haven't posted for a long time, because I was so depressed that my usual humour and high spirits deserted me. Things haven't improved much. Mr Grumpy, my partner, was hospitalised two weeks ago with a dreadful infection in his gall bladder. He is out now, but is being scanned for other serious health problems.

Our entire daily conversation revolves around his health. If I dare to mention that my sinus infection is back, or my stomach ulcers are giving me hell, he counters with a list of complaints of his own and contends that his are far more painful and life-threatening than mine. Sympathy? Forget it. I get more sympathy from the goldfish in the pond.

While he was in hospital, I felt a change come over me. I felt purpose and direction returning. I was able to think, 'I'm going to catch a bus to the tube station and go into town', without facing the third degree: Why are you going? Who are you meeting? How long will you be? When will you be back? You do realise that there'll probably be a signal failure and you'll never get there. I don't know why you're even bothering. Surely you're not wearing that jacket? It's going to rain, you know. And so on, until my initial impetus has been ground into the dust and I take my coat off, utterly defeated.

Yes, being able to do what I wanted when I wanted, without having to take part in any spirit-sapping dialogue, was wonderful. Sorry though I felt for him, attached to drips on his bed of pain, I realised that THERE WAS NOTHING WRONG WITH ME! My old spirit was still there. It had just been hiding under a heavy stone called Mr Grumpy.

I don't know if I dare publish this. He might find it and read it. He might do what he's threatened to do several times before and throw me out on the spot, without any of my belongings. If he did, at least I'd be able to get back on the register and vote, something I haven't been able to do for the last ten years.

I made the mistake of telling him that I was thinking of taking a course in self-publishing. "How much does that cost?" he asked. "£150", I replied, whereupon he scoffed and said, "I've got all the software, I can do it for you." He didn't seem to understand that I wanted to learn how to do it myself, not meekly hand my book over to him so he could do it for me.

Oh, damn it. I'll put myself on the course, anyway, though it does mean trekking into town on two consecutive Saturdays - when there are usually engineering works on the tube lines. Hmm. Maybe I won't, then. Defeated again!
Posted by hydra at 04:08

Hello,
I just noticed that you visited my blog and decided to come over and see who you are. As I am a born again Christian I feel led to share with you that many years ago I had miraculous and other passing time healings. The reason these things have happened are because my trust was put into Jesus Christ, the sacrificial lamb. I am not saying that I have had a perfect life from a human perspective, as I have been through many difficult trials. However, the beauty of my life in Him is that I am still here on earth, sharing my experiences and poems and songs which came into my mind after a near death experience I had, and that life in a beautiful place is promised when we pass from this life when we believe in Him. That written Word is a living Word and has the ability to change our lives for good. 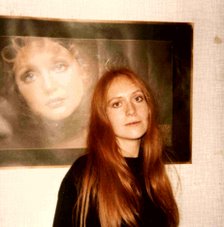 Happy hippy me in days of yore

Humour Her, She's Only a Woman